The Wall Street Journal’s Myra P. Saefong reported on the recent oil supply surge in North America that is expected to result in big changes to the worldwide oil market. According to the Paris-based International Energy Agency, this so-called “supply shock” is primarily a positive development that can bring about numerous opportunities for oil drillers and pipeline operators. Consequently, the United States is said to be getting closer to its dream of finally achieving energy independence.

Saefong elaborates that the increased oil supply can strengthen the investment potential of oil drilling projects in the country. Take, for example, the oil drilling projects in Illinois being marketed by such firms as Emerald Knight. Environmentally-friendly oil drilling has, in fact, been considered as one of the company’s most profitable alternative investments given that it offers considerable tax benefits, while promising carbon neutral exploration and production. 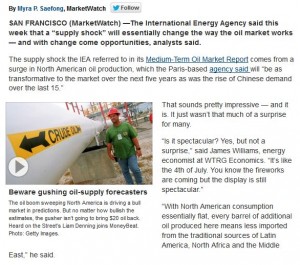 The article also mentions that if the oil supply boom is sustained within the next six to eight months, it will likely result in a considerable rate of return for U.S. equity markets. Traditionally, an individual who wishes to build an oil investment portfolio will need to purchase shares of stock from oil and service companies. These days, you simply need to go through a company listing of the industry or turn to alternative investment marketers like Emerald Knight.

Saefong also writes that in the past, North America was largely dependent on traditional sources of oil such as Latin America, the Middle East, and North Africa. However, the recent unrest in the Middle East has notably brought down regional oil production levels—in sharp contrast to the improving U.S. oil sector. The article also stresses that on-shore and off-shore oil refinery companies are likely to benefit from the increased oil production in the United States.

It’s also interesting to note that the United States is shifting toward shale oil production. Shale oil doesn’t actually contain petroleum; rather, the substance extracted from the dense rock, kerogen, liquifies when heated, thereby yielding the fuel. Such a reaction produces the necessary compounds that can be transformed into synthetic petroleum products.

Alternative investments were once believed to be trailing far behind their traditional counterparts. However, recent developments in the oil industry, particularly the impressive increase in U.S. oil production levels, is testament to the fact that oil investments have a bright potential. In any case, it pays to be quite discerning when putting one’s hard-earned money into any venture. The advice of a certified financial advisor will definitely prove invaluable in this regard.

Previous: Mississippi is Set to Turn Wood Waste Products into Sources of Biomass Energy Next: What the Future Holds for Bamboo and Timber Investments

I was extremely pleased with my investment via Emerald Knight. I found the entire cycle from investment to pay out swift and efficient and was constantly informed throughout the entire process. It did exactly what it said on the tin, and I am sure I will invest again with Emerald Knight.